skip to main | skip to sidebar

Christian Leden and the National Library of Norway

Vulcan Cylinder Records has been privileged to be invited to work with the National Library of Norway in its project to preserve and make publicly available as much of its archival material as possible. Included in the material is a collection of cylinder moulds made by Christian Leden between 1909 and 1955, as he recorded indigenous folk music in Greenland, Canada, Norway and later in Chile, Argentina, South America and Easter Island, though apparently the material from these last expeditions was never edited or published.

Here are some exerpts from the National Library of Norway’s website, regarding Leden:

‘Christian Leden is considered a pioneer in the use of the phonograph for collecting music, and he is also the first to record film from the northern Arctic region. In addition to music he collected objects typical of Greenland's culture, and also took photographs.’

‘In 1909 he went to North Greenland with the famous Danish Arctic explorer Knud Rasmussen.’

‘... Leden argued in favour of preserving Norwegian folk music. On his own initiative he travelled around Norway, making many valuable recordings during 1937 - 1938. He also argued for the establishment of a National Music Collection. ’

For the rest of the story, go to http://www.nb.no/highnorth/leden.php

Our involvement, at Vulcan Cylinder Records, was to take the 200+ cylinder moulds that have been in storage, and to clean them, repair where necessary, and make recordings from them. It is likely that this is the first time some of these recordings have ever been heard.

This has been an exciting project, as we received and carefully catalogued the moulds, amazed at the pristine condition of some and by the corrosion and rubbish on others.

After very careful cleaning, to find most of the moulds in very good condition, to produce the records and then to listen to the results, has been truly amazing. The first batch of cylinders has now been received back in Norway, where they will be listened to, analyzed, oohed and aahed over and then carefully stored away, though now they can be made available to researchers and listened to over and over again.

Duncan, of course, used his wide experience, his own tried and true methods and his own, fairly recently developed, durable plastic to produce long lasting and hard wearing cylinders that can be played many times without any signs of wear.

Here are some photos of Duncan with Lars Gaustad, from the National Library of Norway, when Lars came to visit us recently, to see for himself what we were doing for the project. 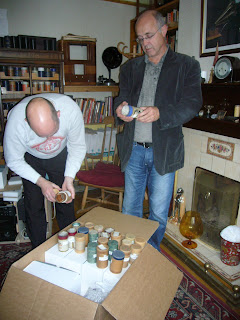 This is Duncan and Lars, looking at the latest batch of cylinder moulds we had just received ... 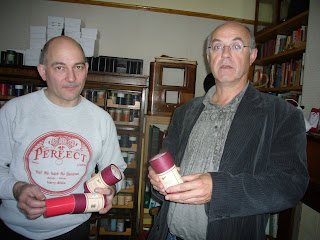 ... and here they are with some of the newly produced recordings, in their specially liveried boxes.
Posted by Vulcan Records at 13:23 No comments:

Hi, this is Gwynn, from the Vulcan Cylinder Records team. Welcome to our new blog site.

If you are into phonographs and cylinder recordings, please feel free to add a comment and be in touch.

Vulcan Cylinder Records manufactures high quality standard cylinders for 2 or 4-minute players, as well as 5" concert cylinders.We have a current list of titles available (see our website at http://www.vulcanrecords.com/), and we can make special recordings of your own material, on request.

Our cylinders are made of a modern plastic developed by Duncan Miller (the founder of Vulcan Cylinder Records) especially for the purpose. This material is very durable and produces a beautiful clarity of sound.

Many of the titles released in the late 1800s and early 1900s are available for us to record direct from original cylinders, while other favourite titles are recorded live.

We release a small number of new titles at the start of each quarter, so keep an eye on the website and be in touch to be on my mailing list.

We look forward to meeting you on the airwaves.

Gwynn and Duncan
Posted by Vulcan Records at 11:32 1 comment:

Vulcan Records
We manufacture and sell cylinders for playing on phonograph machines. We can record live performances, copy from original cylinders or take material from CD or MP3 format. We deliver worldwide.